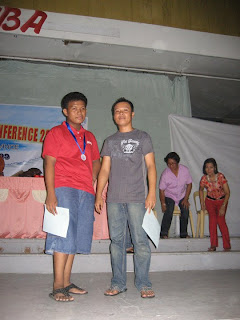 Colong was proclaimed Best Female Anchor in the Radio Broadcasting, a group contest, while Manlunas got the Second Place in the Editorial Cartooning.

The said journalism event was participated by the different schools, both elementary and secondary, from the seven municipalities of Sarangani Province.

Manlunas will qualify for the Regional Schools Press Conference in General Santos City on November, 2009.
Posted by SIMONE OPTIC BLACK BAHAW at 1:00 PM No comments: