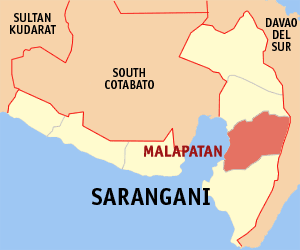 The passing of the late Mayor Aida Singcoy is a great lost to the constituents of Malapatan. In her short but bighearted term as a communal servant, great changes are evidently shown to her people, especially to those who believed in her competence as an administrator. Aside from indoctrinating discipline to work, physical progresses were also given precedence, granting the fact that it was so far her first term as a mayor.

Conversely, her successor Mayor Jorge T. Sambaga, is trying his finest to absorb the town’s highest political spot. Unmistakably, he exhibits his own style of governance which most people find worth appreciating. Of course, it’s not his first era to become a political chief. Before becoming a mayor, he was overwhelmingly voted by the people as municipal councilor, after which, set into the throne of vice mayor, the position he occupied prior to the passing of the late mayor. His experience as the former Provincial Peace Officer of Sarangani also honed his talent as politician. Clearly, his capacity is unquestioned.

Now that the 2010 election is drawing near, the towns’ constituents are again challenged intellectually .Obviously, former Mayor Alfonso Singcoy Sr. is determined to park himself back. People cannot help but recognize the value of his fruitful nine-year experience as the town’s mayor.

Would Sambaga maintain his expedition as the town’s mayor or Singcoy once again return to his throne that depends on the voters’ assessment. For sure, both are equally eligible. Seasoned by time. Two things I’m certain of: both family names are compose of seven letters and start in S. And this S could also mean SUCCESS and SERVICE.